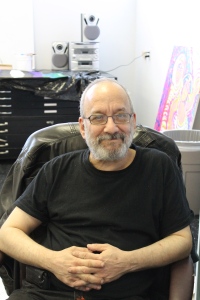 Ken Segal was born on July 7, 1959. Ken grew up mostly in the upscale area of Cheltenham, Pennsylvania. His first artist experience was in Kindergarten. He was an exceptional artist at the time being only 5 years old and as well as having a studio at home was also working pastel. Ken’s favorite artist is the Spanish artist, Salvador, Dali. His main medium of art is fluorescent acrylics. Ken’s favorite subject matter is human figures as he is really figure painter when it comes to his artwork. The meaning behind his artwork is, “that he sees it as an outlet for his emotions and a means by which he can share these emotions with other people.” “I find I have to have a clear vision or plan before painting, which is why I don’t paint every day,” was Ken’s response to what is important to creating his artwork. His future works of art are probably going to be some strange self-portraits or religious subjects, but he’s not quite sure yet. Ken has been a member of CVF since before it existed as he used to work in the building back when it was the RVRC, before the CVF program started. In total he says he has been coming to this building, which is now known as the CVF for 3 years.